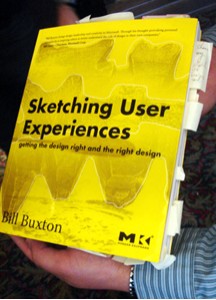 I’ve been reading Bill Buxton’s “Sketching User Experiences” for the past 4 days, and I’m blown away by his insights. His ability to give validity to such a subjective topic as Design is mindblowing. In the book he says that a designer can sketch and, as a result, we are not all designers. Even more, a designer can give deeper meaning to those sketches and through iteration, can bring clarity to complex ideas resulting in a finished product.

Sketching, in it’s various forms of detail from napkin to production-ready manufacturing model, translates ideas into usability. This is very much an oversimplification but will have to do for this discussion here.

Buxton gives many examples about how design is misunderstood but, more importantly, how it can be understood and described to others by us designers. Design struggles to communicate its own purpose.

So, what is good design?

In trying to arrive at an answer I’ve latched on to Bill’s thoughts about music not from the standpoint of a musician or composer, but that of a designer:

“Music by Menu or Gesture

Is it more complex for the user to enter music using a novel single stroke shorthand or using a more conventional approach where the note duration is selected from a menu, and then placed on the staff at the appropriate pitch and point in time?”

Remember the app “Musicworks” that shipped with the first macintoshes? It gave the user both ways to write music: Standard notation and note duration, drawn on a grid like the punches in a player piano roll.

I’m a bassist and a composer and I’ve always wondered why I’m drawn to design and why it feels so similar to music. Plenty of bassists are web designers and developers so I have always known these were similar, if not the same, activities but I couldn’t put my finger on why this was. Both are based in mathematical proportions and logic, timing and spacing, but an elegant answer, a universal answer, has eluded me until today:

Good design is a fluid cadence.

Fluid meaning flow; Cadence, a logical progression. It’s so simple, why did I not think of this before?! Design strives to create harmony among seemingly disparate elements. Music does exactly the same thing.

Thanks to Mr. Buxton, I’m going to start jamming and riffing a lot more at my job as an Interaction Designer! I’m armed with the knowledge that as I iterate, I create.

What is good design to you?

One thought on “What is Good Design?”